Blade is a young woman with an average height and build, though she can become incredibly muscular through her Ragnarok skill. She has short, blonde hair.

Blade is a psychopathic homosexual who hates men with a passion and takes extreme measures to get pleasure from women. When Flare used Keyaru as a sex toy in the initial timeline, Blade beat Keyaru mercilessly out of envy and was disgusted after she unintentionally experienced pleasure doing so.

According to Keyaru, Blade will always look for women whenever she comes to a town. She has no regard for the feelings of her targets, and only concerns herself with gaining pleasure. Blade attempts to seduce them dressed up like a man, and when she succeeds, she brings them home, reveals her gender and rapes her victim should they resist. If the victim is her type and she is unable to seduce the victim, Blade will forcibly kidnap the person and rape them elsewhere. Keyaru adds that Blade will even have coercive drugs on hand as insurance.[1]

In the moment of her death, she revealed to be a coward when she tries to begs Keyaru to spare her life.

Keyaru mentioned that Blade used to operate as an adventurer in a nation allied to Jioral Kingdom before becoming a hero. Since then, she cross-dressed as a man and hunted girls in bars.

Later, she along with the other heroes challenged the demon lord only to be bested. When Keyaru went to fight, Blade told him he had no fighting capabilities before being killed by a mob of demons.

After Keyaru manages to escape captivity, Blade accompanies Norn Clatalissa Jioral to the city of Burranikka. Carrying out her usual habit of hunting girls, Blade's attention is focused on an attractive girl (who unbeknownst to her was a disguised Keyaru) in a high-class tavern. Blade tries to get the girl to drink a cocktail laced with a sedative and an aphrodisiac, but the girl insists she has had too much to drink. Having contained a sample of the cocktail in her mouth, Blade kisses the girl to make her consume the drink and fall unconscious.

After handcuffing the girl to a bed, Blade undresses herself before stroking the girl's body. However, upon discovering the presence of a penis, Blade repeatedly vomits at the thought of seducing a man before being stabbed with a poisoned knife. Blade faints after several of her fingers are cut off, and is then carried to a empty house in the slums. There, Keyaru subjects Blade to the desires of three rabid men, and gives her choice of surviving by submitting, or being eaten by resisting. Blade loses her sanity trying to please all three men, and is eaten shortly before morning.[2] 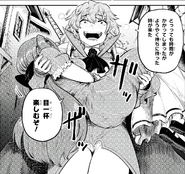 Add a photo to this gallery

Add a photo to this gallery

Retrieved from "https://kaiyari.fandom.com/wiki/Blade?oldid=3468"
Community content is available under CC-BY-SA unless otherwise noted.