Ryōtarō Okiayu
Trist Organ[1], also known as Hawkeye (鷹眼, Yōgan), was a knight of Jioral Kingdom and one of the Three Champions of his nation.

Hawkeye was a fairly tall, thin man. He had somewhat unkept hair, and sprouts a thin mustache. He was somewhat recognizable because of his piercing glare.

Hawkeye was a fairly serious individual. Unlike most characters, and like Kureha Clyret, he had a good sense of honor. Not only warning Keyaru before hand, but also refusing Norn's order to kill guards. He also proclaims to have had fun in his fight with Keyaru and accepts death after being defeated by him.

Hawkeye went along with Blade and Norn to the town of Buranikka as part of Norn's plan to exterminate its demon population. Hawkeye is able to sense Keyaru observing them from the rooftops due to the latter's emanating bloodlust. After Blade winds up missing, he later meets Keyaru (though unaware of his hero status) and his entourage at a restaurant. Trist praises their perceptive instinct to be on guard around him, before warning Keyaru to mind his own business.

Shortly after Norn begins the extermination, Hawkeye spots Keyaru blowing up a Jioral soldier with his healing abilities. He directs the archers on the rooftops to shoot Keyaru from above, before barely missing a devastating shot himself. Unfortunately for Norn's forces, a sudden call for peace from Flare causes conflict to cease among the populace, and the remaining loyalists are easily dealt with by both Keyaru's party and civilians. Hawkeye and Norn agree to a soldier's suggestion to retreat, and Hawkeye invites him to come along to send reinforcements. Knowing the soldier was actually Keyaru, Hawkeye fires an a poisoned needle that manages to graze his cheek, before revealing that his behavior and killing intent were what gave him away. He witnesses Keyaru's Auto-Heal undo the damage, and resolves to target his vitals while remaining outside Keyaru's reach. After Keyaru defends against his onslaught of attacks, Hawkeye opts for a decisive blow as a way to force out Keyaru's trump card. Hawkeye manages to slice into Keyaru's neck and avoid being touched, but is caught off-guard when he suddenly experiences Corruption's effects; the Holy Armament had allowed Keyaru to use it at a short range. Hawkeye commends Keyaru for an amazing duel right before exploding. 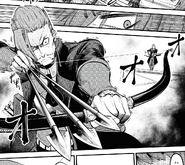 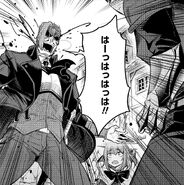 Hawkeye shortly before exploding
Add a photo to this gallery

Retrieved from "https://kaiyari.fandom.com/wiki/Trist_Organ?oldid=3747"
Community content is available under CC-BY-SA unless otherwise noted.